Neutrons have roughly the same mass as a proton, but no charge.

Neutrons have a larger range than charged particles, because they don’t interact with the electrons in the atoms of matter, as they have no charge.

Free neutrons can be classified according to their kinetic energy. They can be roughly divided into three energy ranges:

The energy of a neutron has a big impact on its cross-sections. An important property of a reactor core thus is its neutron energy distribution.

Since neutrons have no charge, they pass easily through electron clouds and directly interact with nuclei. Those interactions can be thought of as two steps: first the neutron is absorbed by the nucleus, forming a compound nucleus, which then decays.

There are two main kinds of interactions: scattering and absorption.

Elastic scattering (n,n): The neutron and nucleus are left unchanged, no energy is transferred. That is, Q=0. It can be understood as a collision where the neutron bounces off the nucleus, and is the only interaction that is not considered to form a compound nucleus.

Inelastic scattering (n,n'): The neutron penetrates the nucleus, forming a compound nucleus in an excited state. This compound nucleus returns to its ground state by gamma decay, emitting a neutron (on a different energy level than the incoming one, so energy was transferred).

In general, scattering refers to nuclear reactions in which the outgoing particle is the same as the incident particle.

Radioactive capture (n, \(\gamma\) ): The neutron is absorbed by the nucleus, and gamma rays are emitted. Other neutron absorption reactions are (n, \(\alpha\) ) and (n,p), which can be either exothermic or endothermic.

Fission: The neutron causes the nucleus to split into two fission products, emitting 2 to 4 neutrons and releasing energy. $$X \to Y + Z + {}^1_0n$$ This can also happen spontaneously, but its probability is low. (Californium has an exceedingly high probability for spontaneous fission, ~3%, which is why it is sometimes used to jumpstart nuclear reactors).

The energy of the resulting neutrons is a probability distribution, with the most likely energy ~700 keV and the average energy ~2 MeV. The are, however, too high-energy to engage in further fission events. In a reactor, they thus need to be slowed down by a moderator like water, where neutrons successively lose energy through elastic scattering.

The microscopic cross-section \(\sigma\) specifies the probability of a particular neutron interaction with a target nucleus. It depends on the target nucleus, the type of reaction, the neutron energy, and the target energy.

The macroscopic cross-section \(\Sigma\) specifies this probability of a neutron interaction for the whole medium. It is considered per unit path length that the neutron travels. The average distance a neutron travels before interacting with a nucleus is its mean free path \(\frac{1}{\Sigma}\) .

With \(N\) the nuclear density:

When the sum of the kinetic energy of the neutron and the binding energy correspond to an energy level of the compound nucleus, the neutron cross section exhibits a spike in its probability of interaction which are called resonances.

Fission cross-section for U-235: 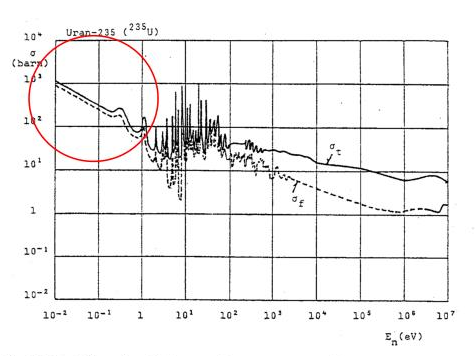 Neutrons generated by fission are in the higher energy range, the red circle marks the thermal energy range. U-235 fissions with neutrons at all energy levels (while U-238 requires neutrons of at least 1 MeV), however in the range of 1-100 eV there are also strong resonance regions for neutron capture. So in order to keep a fission chain reaction going with U-235, neutrons need to be slowed down into the thermal region (~0.025 eV), quickly in order to avoid spending too much time in the resonance regions for capture.

In calculation, neutron energy is often simplified by splitting the energy range into two groups (thermal and fast) and taking the average in each group.